Both images were composites of photographs that I took in Scotland in 2016. The first, Tied Down, I thought interesting because of the lines that tie the boat to some invisible anchors. I wanted the dark shadows and angry sky to threaten the safety of the boat in spite of the lines. Below, the first image is the edited version, the second is the original raw image of the boat, and the third is the sky. Click on any of the images to see more detail. 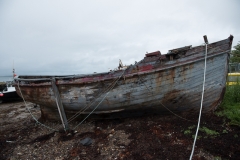 Tied Down prior to editing 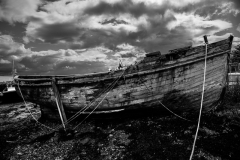 Tied down after editing in Photoshop CC, including changes to the sky 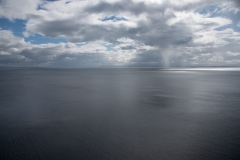 The original image of the boat was not remarkable at all. The colors were flat and the sky was featureless and white. Flat colors almost always suggest black and white to me with some adjustments to exposure and contrast. As for the sky, I found another Scottish seascape that had a fine sky. This gave me a sky with some character and I liked it well enough that I used in several other images. For Tied Down, I converted it to black and white, stretched it a bit to cover the background, and adjusted the contrast to make the sky appear more threatening.

The second accepted image, The Sky, the Sea, used my favorite sky as the star of the image rather than as the background. The seascape itself is boring, but I saw the promise of black and white. A slight, curved gradient helps to focus attention on the horizon rather than the featureless water. The little rain shower at the horizon on the right was perfectly positioned to fit into my anchor at an almost perfect location in the composition. Below, the first image is the final edited version and the second is the source of the wrought iron fence. Click on either to see more detail. 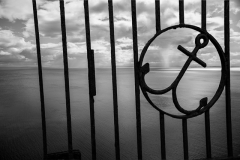 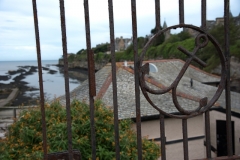 The wrought iron fence came from a Scottish scene that  is missing color and impact. I loved the fence and used it to create the foreground layer. I converted it to black and white and adjusted the exposure so that the detailed features of the fence didn’t detract from the background.

The photos were shot using a Nikon D750 with the Nikkor 24-120mm f/4 kit lens. The lens is heavy and slow, but versatile for travel shooting. I don’t like carrying extra lenses with me on vacation. The edits were done with Photoshop CC. I love Photoshop, but there is little that is easy or cookbook about using it. It takes a lot of time and trial-and-error to get a great result. If you are clever, you can avoid the need to start over if you make a mistake during the trial-and-error part.

My first love is street, photojournalism, and candid photography. This kind of editing is not acceptable in those divisions because it materially alters the facts. It has been important for me to leave my sandbox to compete in other open categories because of the ability to experiment and most of the artistic skills transfer.

This is a continuing tale about improving personal photographic skills and the value of competition. I’m still navigating through competitions and I’m continuing to compete. My finding thus far is that some events have more value than others and that I have a need to find other ways to get feedback.

This year I have completed three digital photo competitions outside my club. The first one, organized by the Professional Photographers Association of Massachusetts, set my expectations. The judging was live streamed at the event so that many competitors received some kind of critique. All of the scores were available as well as the images so that you could view the competition and understand the differences in the scores. I could also see where I stood in the ranking of scores.

The second results came from the Ridgewood Camera Club International Exhibition. Their web site shows the number of Acceptances and number of entries for each country by category. However, if you miss the threshold for Acceptance, it is impossible to determine how you fared against the field of competitors. This approach works for the artists that achieved Acceptance or an award, but not for the people like me who are hoping to use the experience to improve their skills.

My most recent results from my third competition came from the Atlantic International Photographic Exhibition. In this case the Accepted and Awarded images will be displayed on the web site beginning in May. I’m hoping that the scores are given for each so that I can determine the artistic threshold for Acceptance. I know the scoring threshold, but need to view the images and understand the rank of each in the eyes of the judges. That’s the only way to determine the artistic differences as the scores increase.

Still, it would be nice to know: Was my score “Average”,  “Below Average”, or “Above Average”? What was the distribution of the scores: how many competitors had lower scores and how many had higher scores? The average doesn’t mean anything if most of the scores are “Average”. In my first competition with the PPAM, I was a solid “Average” with plenty of competitors above me and below me in scores for most of the five images that I submitted. I considered that an achievement in my first competition ever, especially since I was competing mostly with professionals.

I’m not expecting to soar up the rankings, but I would like to know where I stand and whether or not I’m improving. In parallel with competitions, I have found other means for getting feedback on my images. I have submitted images to reviewers at both the Professional Photographers of America and the Photographic Society of America with good results. The PSA also has study groups that I am joining. I may also take a shot at certification with the PPA. It’s important to know all of the options available to you and to take advantage of those that interest you because many competitions don’t provide a complete assessment of your skills.