I tried to make it work, but it couldn’t last. Supsistic Gallery failed me and I let it go. The obscure terminology and illogical human factors were just the beginning of the problems. Changing the order of galleries on my gallery page required deleting and recreating the gallery page in the Supsystic plugin. It’s buggy. The failure of a simple two image galleries was the last straw.

I had two images that I wanted to show in a post. The post is about the edits done to an image and I wanted the reader to be able to see the raw image and the result of editing.  It was a great idea because in theory both images would be displayed on the page. A click on either image would display the images in a larger pane and the navigation arrows (forward/back) would allow the reader to view both images in the same pane to get a comparison. Forward/back didn’t work. Even clicking on the thumbnail of the other image at the bottom of the pane didn’t work. Changes to the settings were ineffective. I quit and searched for an alternative.

I found NextGEN Gallery by Imagely. The first thing I did was look at reviews and there were a huge number of one star reviews. On closer look, I found that the bad reviews were a year old and the good reviews are recent: a good sign. I checked out a video on their web site that described the interface and its use in creating galleries and albums.

I downloaded the free version of NextGEN Gallery and loved it. It was intuitive, unlike Supsystic Gallery. I purchased the pro version. The result was a better appearance on my site and more reliable performance. My Gallery page looks more finished and professional. The simple gallery in my image edit post dropped in without a hitch and works as desired.

There may be a WordPress plugin that is even better on the market. Until I find a fatal flaw in NextGEN, I’m going to stick with it. It seems to do almost everything that needs to be done on a photo blog.

This image was awarded first place in the Art League of Lowell Exposed 2017: Shadow Play exhibition. The original raw image was shot in January 2017 using a Panasonic Lumix GF1 with a M. Zuiko 25mm f/1.8 lens at ISO 100 and f/4. This was a print competition. The black and white print was done by Digital Silver Imaging on Ilford Galerie FB paper. The frame came from American Frame. Below, the image on the left is the edited image and on the right the raw image. To see more detail, click on either image. 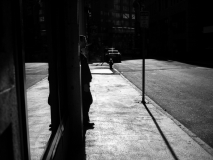 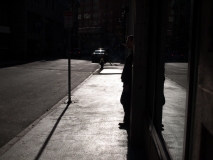 Clandestine (Raw) - Straight out of camera

One of the gratifying things is that I had just bought the camera for $125 and the lens for $222 on eBay. I bought it to try Micro Four Thirds because the size is much better for lugging around on the street and because live view is more convenient for a lot of street photography. My assumption on the lens was that I would be able to use it if I decided that I liked Micro Four Thirds and upgraded my camera body. Ultimately I found that I loved the form factor and upgraded camera body and lens.

New used camera in hand, I hit the streets of downtown Boston on a mild day in January. The long winter shadows offered many opportunities to capture life downtown with dramatic natural lighting effects. This man had popped out of a side door to enjoy a cigarette in the shadows.

All of the editing of the raw image was done in Lightroom CC. The image was converted to black and white using a personal filter that I call “Ed BW”. It’s a filter that I created to try to separate the subject from the background. After conversion, most of my editing time was spent removing the distracting white reflections in the background and toning down the bright windshield in the center of the frame. I used a radial filter to accentuate the outline of the subject in the doorway.

The final edit was flipping the image horizontally. The rationale was that when people who read from left to right look at images they can be distracted when forced to look from right to left. It seemed more natural to have the subject face to the right.

The Lumix GF1 gave me a very sharp image out of the camera and the black and white conversion resulted in a simple image that required little editing.